Start a Wiki
Arkheons or Elementals, also mistakenly called Archons, are creatures of a said element. For example, Pyro Arkheons are used for forging and sometimes war. They all reside within Arkland Isle and speak fluent Arklandish.

Arkheons are generally 2 metres tall with two arms and sometimes legs. They have a dark sense of humour or none at all. They come in many different varieties.

The Pyro Arkheon are made of fire with tungsten armour to contain themselves in, found only across Hapec and some parts of the neighbouring continents. They use the force of their fires to levitate off the ground. Their flames can reach up to 4,500 degrees Celsius. As they age, their flames lose heat, but gain heat when angered. The centre point for their flame is somewhere in the centre of their chest.

The Kyro Arkheon is a sight to behold. It has no legs, but has a similar hovering ability to the Pyro Arkheons. Kyro Arkheons are considered to be holy priests from the Gods and as such they preach to Yloter, the Arkheon's God. If they stretch, energy crackles between their limbs. They are blessed by another each day.

The black Necris Arkheon is the same shape and size as the Kyro Arkheon, but unlike the priests, this Arkheon is jet black and is made of shadow until they are in a light or until they wish not to be a shadow. Using this, they make great assassins and in some cases, they can just walk up to their target and stab them if there are no light sources around shining on them. There are a few reported cases of Necris Arkheons being able to convert into Abyssia Arkheons and sometimes creating half-breeds, though this is but a rumor.

Era Arkheons are green and have the ability to focus their energy into a single target, healing it from mortal injuries and giving it some strength before the Arkheon runs out of power and has to wait for its power to recharge. Recharging takes a few minutes. Era Arkheons are responsible for creating more of their kind using their magical abilities.

Kia Arkheons are purplish creatures. Upon contact with any other living organism, it will be in horrible pain for the next 20 seconds. This ability doesn't effect other Kia Arkheons, though through training it can be eliminated. Kia Arkheons also have the ability to shoot a beam of the magical word Kia simply by merging their arms into one. They can do this for up to 2 minutes.

The Siro Arkheons are green, but not quite as bright as the Era Arkheons. The Siro have the ability to heal minor and sometimes major wounds, but a mortal wound would be out of their field of expertise. They can use their powers in succession. Siro Arkheons are also responsible for helping the Era create more of their kind.

The Terra Arkheons are big and bulky with solid legs. They carry shields and weapons like other races but have few pieces of armour as their bodies are made of solid rock and stone.

The Qai Arkheons are a small whirlwind in their own right, with lightning sometimes going off within them. They carry weapons and shields, though armour is sometimes tricky to hold up due to the fact they are made of wind.

The Mina Arkheons are quite rare in society as in early history, most townsfolk didn't like being controlled and killed most of them off. The most powerful Mina Arkheon recorded is currently their dictator who holds all of his population under his rule.

Like other mortal races, rarely, a child is born with as an Abyssal Child, half mortal, half Dez'aq. Abyssia Arkheons are forevermore Abyssals, but have developed very heavy armor to turn these stealthy, nimble threats, to massive, tankish behemoths.

Arkheons continue to develop and evolve, forming new and extremely rare forms out of unknown words of magic, namely that of Level 5 words (mostly Sound and Gravity)

After the Arkheon's creation in 3178, they have gone on to do great things for their race and since the beginning of their time, they have worshipped one Dez and have always had a Mina Dictator.

The Arkheons were created on Arkland Isle by the Order of Forbidden and Forgotten Magic. Through several years of exhausting magic, the Order was able to do something not done before: create a magical prefix. This prefix, Arkhaera, when added to any word, pulls said element together in a living being, an Arkheon of this element. As this worked, they went on and made 9 Arkheons, one of each, before leaving the Arkheons to develop society, though as Erayus planned to launch a conquest to Hapec, the Arkheons were sent back in time to 1002 to develop. Though the Order was able to send them back into time, this magical overload killed almost half their existing members at the time, but it was deemed a success as the Arkheons lived to advance and evolve. 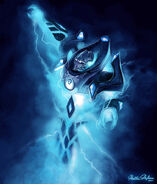 Necris/Abyssia Arkheon
Add a photo to this gallery
Retrieved from "https://risingdawn.fandom.com/wiki/Arkheon?oldid=5969"
Community content is available under CC-BY-SA unless otherwise noted.